The epigraph to Forster’s Howard’s End is “only connect.”

To which his neuroscience fans say: if only it were that easy.

We all know by now that there are 100 billion neurons in the brain, each with 10,000 connections to other neurons, each firing 300 times a second, so that more or less the brain produces a 300,000,000,000,000,000 or 300 quadrillion bit dataset every second of our lives. By the way, an electric 300 quadrillion bit dataset, manifested in three dimensions as a voltage configuration of the electromagnetic field (don’t worry, that’s just another plug for my panpsychic theory of electric consciousness – can’t let the opportunities slip). And so we know there’s an awful lot of connections to understand. But it isn’t that clear how we should go about doing it. There’s a reason that, to date in popular neuroscience, there has been an inordinate focus on “grey matter”, as though it’s all those fermions (electrons, protons, neutrons) in the brain that are doing the thinking. Connections are more daunting. But of course the action is almost certainly where Forster indicates.

Consider this analogy. Let’s say you were in the NSA and wanted to know what Americans were saying to one another.  Knowing the distribution of cell phones in the United States (the equivalent of knowing where all the neuron cell bodies in the brain are) might tell you this much (pinchy fingers). A complete list of every phone’s contact history (eg, who is calling who, and when, and for how long – the equivalent of knowing where all the synapses are) would tell you this much (hands a foot apart). But actually recording all of the conversations would tell you this much (the equivalent of knowing when each synapse is firing) would tell you the most you could hope to know (arms stretched as wide as possible). No wonder the NSA has been going for warrantless wiretapping, and not merely asking Verizon for our phone numbers. They learn way, way more.

This is not news to modern neuroscientists.  Despite the popular press’s relentless focus on “what part of the brain thinks what,” we’ve known the action is in the connections and action potentials forever. EEG anyone? For example in 2009 I was the 9th author on an article calling for the mapping of the connectome in model animals (eg, several orders of complexity lower than the human brain) in PLoS Comput. Biol. 2009 Bohland et al. The only reason I’m the 9th author is that they listed us alphabetically. I just happened to be at the gathering of neuroscientists who wrote it, and contributed a few jokes and a brief talk during the meetings. Plus I think I won the beer pong comptetition  in the basement on the second night. Conceptually it’s the brainchild of Partha Mitra at Cold Spring Harbor (more on him later).

Three years later, in 2012, a paper came out that studiously ignored the Mitra paper (check the citations. You can’t find it! Maybe they didn’t do a lit search first? Maybe they’ve never heard of the multiple tenured professors who signed the 2009 article? Who knows). This paper was not marked by Mitra’s caution. They made a far more grandiose call to map not just the connectome (eg, the pattern of neural connetions) but the actual action potentials in the brain. And not just the mouse brain, like Mitra, but the far more enormous human brain. (PDF here: BAM Proposal.pdf.) It didn’t make too big a splash at the time, but behind the scenes politicking was at work. And maybe its vagueness was what allowed it to gather political clout.

Around a month ago the NYT breathlessly announced that with Obama’s blessing the BAM proposal was going to actually happen. Everybody got jazzed and you’ve probably heard a bit about it here and there.

But was all the fuss deserved? To be sure, the particular individuals involved in the project are brilliant and doing work that will one day win well-deserved prizes. But their individual brilliance doesn’t mean they’ve got a clear idea about how to pursue this collective connectome.

Even the casual reader of the NYT article couldn’t help be struck by the vagueness and lack of organization that attended the NYT’s description. Check this out:

Composed of roughly 100 billion neurons that each electrically “spike” in response to outside stimuli, as well as in vast ensembles based on conscious and unconscious activity, the human brain is so complex that scientists have not yet found a way to record the activity of more than a small number of neurons at once, and in most cases that is done invasively with physical probes. But a group of nanotechnologists and neuroscientists say they believe that technologies are at hand to make it possible to observe and gain a more complete understanding of the brain, and to do it less intrusively. In June in the journal Neuron, six leading scientists proposed pursuing a number of new approaches for mapping the brain. One possibility is to build a complete model map of brain activity by creating fleets of molecule-size machines to noninvasively act as sensors to measure and store brain activity at the cellular level. The proposal envisions using synthetic DNA as a storage mechanism for brain activity.

Wait. What? Did that actually get printed? “One possibility is to build a complete model map of brain activity by creating fleets of molecule-size machines to noninvasively act as sensors to measure and store brain activity at the cellular level.” Do they even have fact checkers at the NYT any more?

Scratch that. Last week a fact-checker at the NYT called me to fact-check that Freud really believed the libido could be sublimated into pro-social activities. He called me three times (in fairness, I wasn’t calling him back) to fact check something that you could find in any freshman psychology text. I guess they don’t have one of those at the Times (I find phone tag annoying and emailed the writer (the fact checker didn’t leave his email) this and this and this and the fact checker stopped calling). Meanwhile that same guy, far as I know, thinks that fleets of molecule sized machines (you mean this size? or this size? there’s a three orders of magnitude range, people!) noninvasively (you mean injecting molecules into the bloodstream to enter the brain isn’t invasive?) storing (like flash drives?) brain activity (you mean spike trains – which require large memory stores up here?) at the cellular (again: this size? or this size? It’s like saying Mt. Everest and Notting Hill are the same basic thing) level seemed perfectly plausible to someone there? More plausible than a hundred-year-old concept of Sigmund Freud being a hundred-year-old concept of Sigmund Freud? Really? This must be what happens when you hire humanities grads to fact-check science articles. Which raises the question “do they even have science-fiction checkers at the NYT any more?” Because that sentence right there is straight-up science fiction.

The point is that nobody interviewed could really say what they wanted to do, or how it was going to help anything. They all sounded more or less like grade schoolers describing wanting to become astronauts when they grew up.

Now of course there’s nothing wrong with this per se. I hope they do throw money at these guys – plenty of it. They’ll put it to good use even if they aren’t organized and don’t end up doing what they say they will. Let them act like academics used to: wandering around looking for natural phenomena. “Puttering around,” as my dad used to describe what he did some weekends in the tool shed, has a long history of producing useful and unexpected results. And there are many worse things that we could be doing with our money – like this and this and this and this and this. Many, many worse things.

Still, given that it was scientists doing the proposing, their proposal didn’t seem as modest or organized or theoretical as what Mitra et al had proposed. To a cynical mind – say, mine – what’s really going on is a well-deserved and totally laudable money grab. Hiding behind claims of doing for the brain what the human genome project did for DNA, these scientists will simply be getting more money to study what they’re already studying. But in order to do so they have to claim that they are going to record all the zips and zaps and figure out what it all means. And we need to take this claim – even if it isn’t really an accurate reflection of what’s going to happen with the money – seriously. The claim is that those famous emergent properties of the brain – you know, the ones that supposedly can’t be seen at the lower-levels of organization we’re always looking at under the microscope, but that pop into existence by some mysterious force or principle when you get enough neurons working together just so – will come into sharper view if we could can map the connectome.

Which brings us back to the question: what is the connectome? The neurons doing the connecting? The synapses that are the connections? The actual patterns of neural activity zipping across all these connections? The potential patterns, not actually zapping but capable of zapping? To the sound of these questions re-enters Partha Mitra.  He recently published a critique of the BAM Proposal in Scientific American last month (.pdf here).

In his cautionary article, Mitra makes three key arguments that are worth considering. First, he thinks we need more theory and less empiricism. “We need to answer the theoretical question of what we gain by recording every neuron.” In particular he is worried that the bean-counters are taking over here. “We want to understand the laws of brain dynamics, not the details of brain dynamics.” Second, he thinks individual neurons play a far larger role as keys to understanding the whole brain than the connectionists seem to think. “What sets the laws of the neural network? Well, it is precisely… the physiology of single neurons that the authors have dismissed.” Finally, he is concerned with premature microscopicism. Rather than looking at brains, we must think about the functions – particularly the natural and reproductive selection functions – that brains have evolved to execute.

These ideas are all near and dear to my heart. You can’t understand 100 billion neurons if you don’t understand 1 neuron. You can’t understand 1 neuron unless you understand how it creates a specific response out of a range of potential responses. And you can’t understand how it selects that specific response if you look at the brian in isolation from some larger – dare I say metaphysical? – theory of “what the brain is trying to do.” Until we get teleology back into neuroscience – and start to talk about the brain’s intentions – all the zap-mapping in the world isn’t going to explain the emergence of the mind from the brain. Let alone lead us to the understanding that if the electromagnetic field is the ground of consciousness, the mind doesn’t emerge from the brain at all. Rather, the brain filters it out of the omnipotential field.

I suppose in all this we could do worse than recall that at the end of Howard’s End Leonard is killed by the symbol of all he aspired to: an enormous tower of books, unread, collapses when he grabs it, falls upon him and breaks his heart.

One suspects a similar fate awaits those expecting too much of the connectome as currently conceived. The prediction here: a morass of data with precious little enhancement of our understanding of how the brain creates the mind. Still as my dad, ever the optimist, would have said, whatever comes out of this should be worth a good putter. 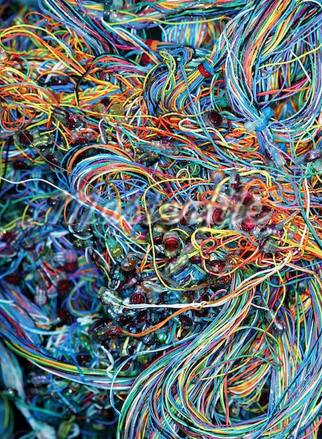 Gratitude for the image (used without permission) from this site: http://www.humanconnectomeproject.org/gallery/ Will remove upon request!

I am a psychiatrist & psychotherapist specializing in the treatment of self disorders. View all posts by Peter Freed, M.D.